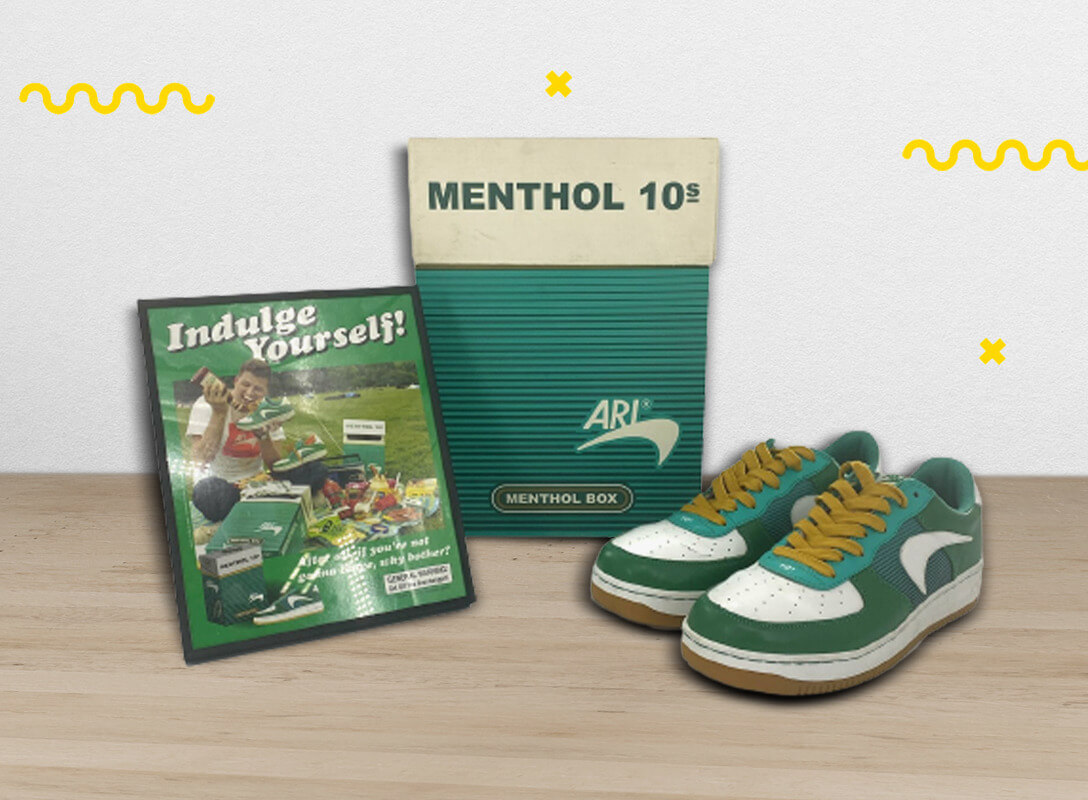 “Sneaker culture” has grown exponentially. From its simple beginnings as a hobby that combined fashion and sports, it has now become a living sub-culture with a massive market. For “sneaker heads”, sneakers aren’t just footwear, but also status symbols that worth struggling for. It’s common for them to go to great lengths for the right sneaker, such camping out to get the latest releases, or pay multiple times of retail price.

The unawares may dismiss sneaker cultures as a mere symptom of capitalistic appetites, but the shoes themselves, in some way, are works of art, engineered by hard working artists. Art can come in any form, including sneakers. Therefore, sneakers, like any other form of art, can convey a message or a statement. Such is the background of Ari Menthol 10’s

In the early 2000s, sneaker culture was just starting to gain its legs, greatly helped by the development of the internet. Websites like Ebay and Nike Talk helped sneaker cultures grow in its infant years. At around the same time, a fashion designer named Tamoaki Nagao, or Nigo, started producing Nike bootlegs as a criticism of the Nike and Adidas duopoly. “Bathing Ape” is Nigo’s statement on how quality brands did not have to come from “the big two”. Small brands could also deliver products as good, if not better than them. This bold move that combined bootlegging and fashion culture savvy was what inspired another designer, Ari Saal Forman, to create his own statement.

Ari Foreman is a graphic designer and sneaker head who felt serious frustrations at two of his clients, Nike and Newport, albeit for very different reasons. Foreman was dissatisfied at Nike, whose products he deemed too safe and unimaginative. “I was frustrated by clients who do not understand the value of what Nigo has done” said Foreman in an interview with Vice.com. Meanwhile, Foreman’s frustrations with Newport represented his hatred towards the tobacco industry in general. Foreman questioned how cigarettes have such a destructive influence on the population, yet it doesn’t have a negative reputation equal to alcohol or drugs. He elaborated on how nicotine addiction has ravaged his family, particularly to his late mother, who according to Foreman, still forced herself to smoke even when she had to breathe with an oxygen tank.

Foreman realized that despite the very different reasons for his dislike towards those two very different brands, there were a few important similarities between them. Particularly how both brands marketed their product by creating addiction to their consumers. This pushed Foreman to create the Ari Menthol 10’s as a means to start a dialogue, an art project that disguised itself as a pair of sneakers. One stone to kill two giants at once.

Design wise, Ari Menthol 10’s “borrowed” much of its concepts from both Nike and Newport, either subtle or obvious, mostly with comic effect. Turquoise, the main colour used, is also the brand colour for Newport, while the sneaker’s sole was designed to look like cigarette filters. The star patterns that commonly appear in normal Nike AF1s are replaced by dollar signs. Furthermore, the word “Air” is switched to “Ari”.

Perhaps Partners that are unfamiliar with Newport might assume that the logo used in Ari Menthol 10’s is simply an upside down version of the famous Nike swoosh, but it's actually the Newport logo called “Spinnaker”—a coincidence that Foreman utilized cleverly.

Furthermore, the box is shaped like a cigarette case complete with a label saying “General Warning: Get Off the brandwagon!”, which isn’t the only provocative text that appears in an Ari Menthol 10’s package. The shoe tag also has a message that reads “This sneaker is dedicated to the two brands that have taken the most and given the least. Thank you for the motivation, now it’s our turn. 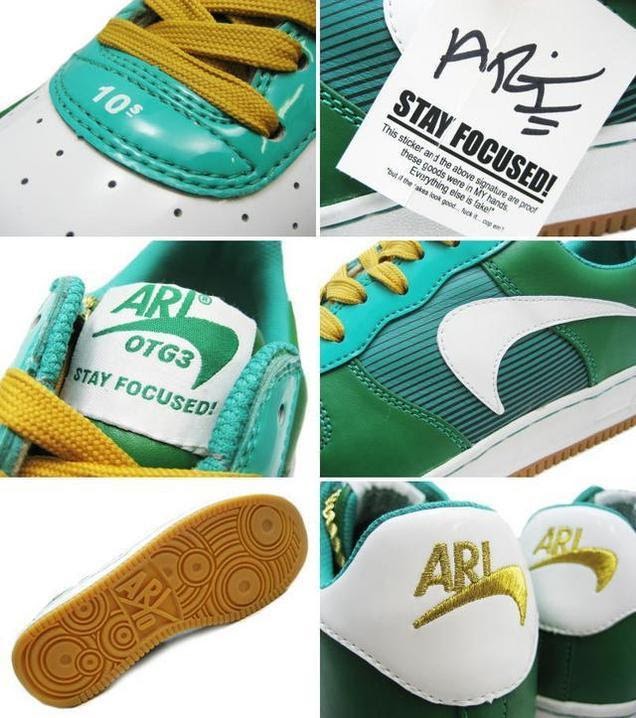 Arti Menthol 10’s was circulated to a relatively tiny market.  Released on June 17th 2006, only 252 pairs were issued by its Chinese production, and those pairs were exclusively sold in Alfie and Clientele stores in New York. The shoes were received warmly by sneaker heads and quickly sold out. Of course, this was soon followed by an equally fast response by the two brands in question. Nike sent a cease-and-desist letter concerning the logo used by Foreman which he found amusing. “The logo that I utilized has been Newport’s logo for 20 years before Nike. Why didn’t they object to that” he explained.

Newport, though, took a far more aggressive approach. They doubted Foreman’s claim of having only 252 pairs of Ari Menthol issued, and sued for infringement damages. Lorillard, the parent company of Newport, has an agreement with the US federal government that restricts them from certain practices of advertisement, which includes advertising to minors. Therefore Lorillard was especially worried that Ari Menthol 10’s had used their brand to market to kids.

The disputes were eventually concluded by an out-of-court settlement that stopped any future sale of Ari Menthol 10’s, as well the destruction of all remaining unsold pairs. Ari Foreman himself is also forbidden to own Ari Menthol 10s. He cannot use them, cannot own any digital image of them, cannot profit from them and can’t even discuss them. He was also required to buy any pair of Ari Menthol 10’s that he found in the market for under $250, to send to Newport to dispose of. “After two years they stopped contacting me. Maybe they thought I learned my lesson” explained Foreman.

However, when asked whether he regrets his actions, Foreman stated “No, because I started a dialogue. I could've just said ‘hey, be a responsible consumer!’ but that wouldn’t be as effective. If I could do it all again, I would. I’d even do it more intensely.”

Nicotine addiction is surely not an exclusively American phenomenon; it’s also a very real problem here in Indonesia. According to research conducted by the Southeast Asia Tobacco Control Alliance, nicotine kills approximately 250.000 Indonesians every year. Moreover, 70% of men over the age of 15 identify as smokers, the highest number in the world. This problem doesn’t discriminate against any age group. The same study shows that 20% of children aged 13-15 are smokers, and before the age of ten, 20% of Indonesian children have tried cigarettes.

It’s undeniable that the tobacco industry has a powerful grip on Indonesia. Infringement is, of course, unjust, but it would be interesting to see the public reaction if there was to be a local artist who did something like Ari Foreman did.