Alligator vs. Alligator: Lacoste vs Crocodile 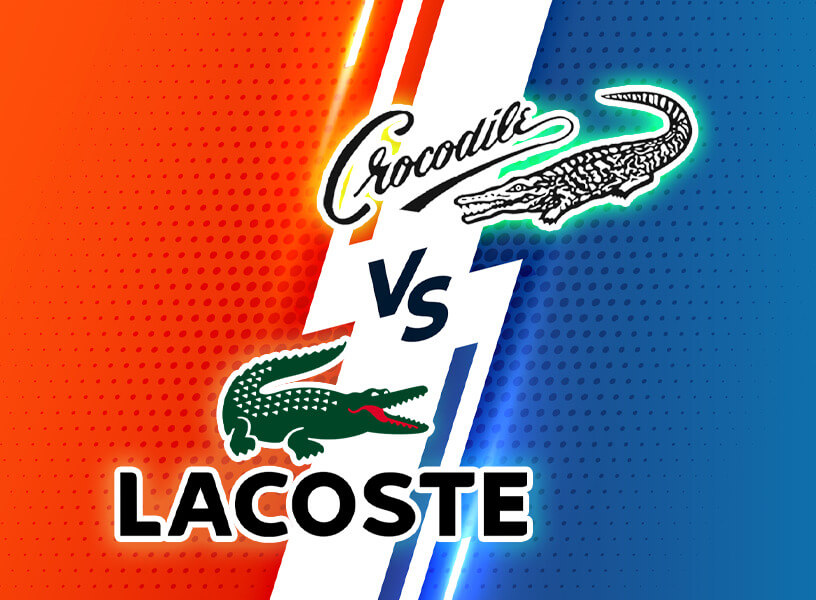 René Lacoste (1904-1996) and his colleague André Gillier launched the French brand Lacoste in 1933. Clothing, footwear, sportswear, eyeglasses, leather products, fragrances, towels, and watches are all available from the brand. Lacoste is distinguished by its green crocodile logo, which is oriented to the right.

Meanwhile, Crocodile Garments is a textile and garment firm headquartered in Hong Kong that was established in 1952 by Dr. Chan Shun.

Rene Lacoste, a French tennis player, was nicknamed as the "crocodile" in the 1920s because he once bet his coach a crocodile leather bag if he won a match. Then, in 1933, he used the reptile logo on his sportswear collection, which included a polo shirt meant to replace tennis players' stiff collared shirts.

The Crocodile, on the other hand, first debuted in the 1950s, with a crocodile facing left, opposing the Lacoste crocodile emblem. Dr. Chan touted his materials as being as tough and sumptuous as crocodile skin at the time.

Problems occur when these firms grow internationally, particularly when Lacoste attempts to penetrate the Asian market, given that Crocodile has registered its brand in various Asian nations. Crocodile and Lacoste went to fight in China, with Lacoste attempting to prevent Crocodile from registering its logo in the 1990s. Until, at long last, the two brands with the crocodile logo negotiated an agreement.

Crocodile agreed to modify its logo, which now has scaly skin, bigger eyes, and a vertically rising tail, as part of the agreement.

The next dispute occurred in New Zealand, when Crocodile sought revocation of the Lacoste mark on the basis that it was not being used, but the action was dismissed by the court.

There's a popular phrase about this crocodile logo rivalry: "In the river, crocodiles will battle for supremacy.   It's much the same in business." The Lacoste logo on the right and the Crocodile logo on the left are so similar that it takes a generation and hundreds of thousands of dollars to figure out which "crocodile" is superior.

The story of the "crocodile" logo taught us that a brand is a product's identity. Consumers use brands to recall, identify, and seek specific products.

In a business environment which consists of competing entities, providing comparable products and services under similar names and logos, it's a smart idea for an entrepreneur to spend some time and money hunting for an identical (or similar) brand name or logo before investing in trademark protection.

You can also seek assistance from reputable IP consultants such as Am Badar & Am Badar in going through this process for the brand you intend to register and obtaining a complete legal opinion from experienced Intellectual Property lawyers and experts.