The phenomenon "Citayam Fashion Week" has been a hot topic of discussion lately. The teenagers that gather in Dukuh Atas, Central Jakarta, have caught the Indonesian public's attention with their signature streetwear and carefree attitude. This fashion movement has been compared to those in Shibuya (Japan) or Milan (Italy), but with style distinctive to Indonesian youth.

This move was widely panned by Indonesian netizens. Much of the criticism believed that Baim Wong had exploited and even "stolen" a movement that was started by the Citayam youths. Sentiments of class war were also present, as most of the original participants of CFW were from the lower economic class, and this trademark registry was seen as a "robbery" by the upper class. The slogan that is commonly used in football, "Created By The Poor, Stolen By The Rich," was briefly viral in response to this.

What exactly is happening? Has Baim Wong truly stolen CFW? Is CFW no longer free to be enjoyed by the public?

This issue was so controversial that on July 26th, The Directorate General of Intellectual Property held a press conference to discuss it.

During the press conference, Plt Director General Razilu M.Si., CGCAE, gave detailed explanations intended to address the public while also educating them on certain misconceptions. He elaborated on trademark registrations, underlining that everyone has the right to apply for the registry of a trademark, even if the applicant wasn't the original creator of the trademark, in accordance with the first-to-file system.

Concerning Citayam Fashion Week, Razilu was aware of all the noise surrounding it. He gave an update that, as of July 26th, 2022, three parties have submitted trademark applications for the term Citayam Fashion Week. They are, namely, PT Tiger Wong Enterainment, Daniel Handoko Santoso and Indigo Aditya Nugroho.

Interestingly, Razilu seems to have sympathized with the general public's sentiment. At the time of the press conference, one of the three applicants, Indigo Aditya Nugroho, redacted his application. Razilu expressed his appreciation for this decision and urged other parties to follow suit to cease the ongoing controversy.

Regarding this, another applicant, Baim Wong, has also retracted. In a video uploaded on YouTube, Baim Wong explained that he intended to help uplift the kids of Citayam, but the public had greatly misunderstood his actions. Naturally, he decided to retract his application to avoid further public anger. 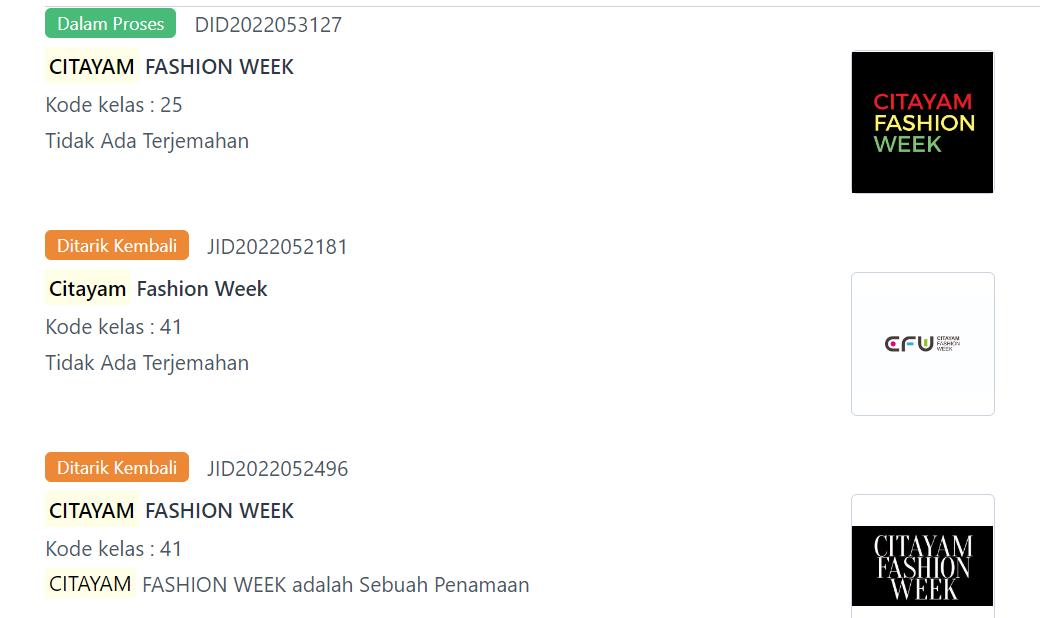 As of the time of writing, two out of the three applicants have retracted. There are yet any updates on the third applicant; however, what is clear is that the public doesn't need to worry about Citayam Fashion Week being "stolen," as none of these applicants are yet in effect. Furthermore, a trademark wouldn't necessarily prohibit anyone from participating in CFW. As a public event, CFW's existence does not depend on its registry as a trademark but on matters concerning its permit.

If CFW were to last, ideally, the original people behind it should unite as a community and apply trademark registry for the term. This, followed by collaborations with event organizers to apply for permits, could ensure that CFW wouldn't stray too far from its original spirit.

If you have any questions regarding trademark or anything related to IP, please get in touch with us via marketing@ambadar.co.id. We will provide the best service for you.