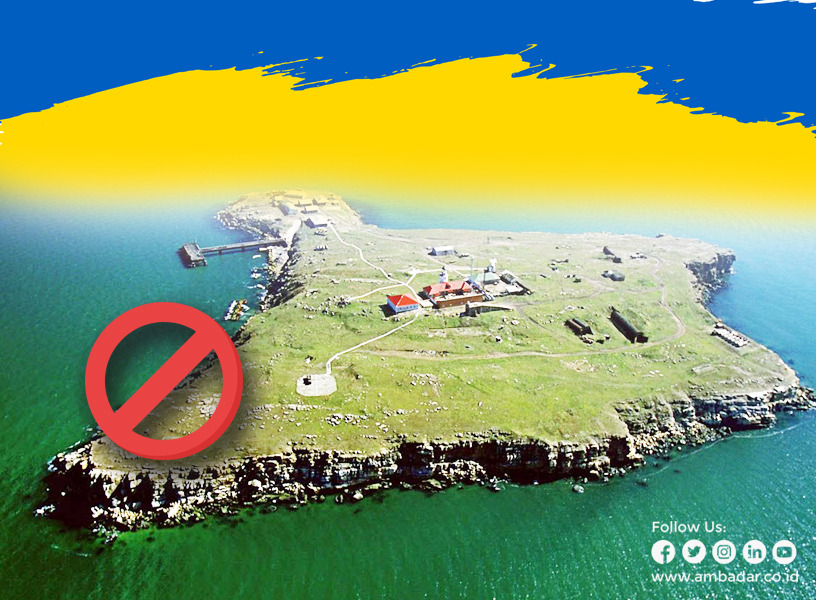 The situation in Ukraine has yet ceased. Since Russia officially invaded their neighboring nation, dozens of buildings have collapsed, thousands of missiles have been launched and above all, innocent lives have been lost. This action has been widely condemned by many nations, particularly by those in Europe, where Putin will be infamously remembered as the perpetrator of the biggest all European military aggression in the 21st century. From this tragic situation, many stories have emerged. Mostly tragic, rage inducing, harrowing, while others are inspiring. However, one story borders on the absurd, and unexpectedly, connects to trademark. Zmiinyi, or what is locally known as Snake Island, is a small Ukrainian island in the Black Sea.

On February 24th, that island became the center of international attention when a Russian warship named Moskva approached it with the intention of seizing control. The Russian ship’s crew urged the 13 guards of Snake Island to surrender themselves, as detailed in this radio transcript:

"This is a Russian warship. I ask you to lay down your arms and surrender to avoid bloodshed and unnecessary casualties. Otherwise, we will bomb you," said a Russian soldier.

This was met with a fierce, and now iconic, response from a Ukrainian guard:

Even though the Ukrainian guards were later captured by Russia, their immense bravery has become a massive source of inspiration. Their response to the warship’s demands is now an iconic slogan that symbolized the struggle and spirit of the Ukrainian people. That slogan as well as iconography of Snake Island soldiers are now on posters, t-shirts, and even stamps. Symbols proudly worn by Ukrainians and their sympathizers around the world.

Exactly a month after the Snake Island attack, Russia freed a few of the guards as a prisoner exchange. One of the guards released was Homan Hrybov, the man who is believed to be the speaker of the now world famous slogan. Meanwhile, the warship Moskva was sunk by Ukrainian missiles on April 13th. Partners might wonder, why are we covering this? What does this have to do with IP?

As we all know, humans are opportunistic creatures. People will seek out opportunities even in the most intense situations Last months, it was reported that Roman Hyrbov’s family has applied an EU trademark registry for the slogan “Go F*ck Yourself, Russian Warship”. It seems that the Hyrbov family is fully aware of the slogan’s popularity and saw the economic potential behind it.

Registration for this slogan is submitted in English as well as in Cyrillic text. According to a representative of the Hyrbov family, this registration was carried out in response to registry attempts by retail companies in the United States and Lithuania

This slogan in Indonesia?

One question emerges from this news; could this slogan be registered in Indonesia? To answer this question, let’s take a look at Law No. 20 Year 2016 Concerning Trademark and Geographical Indication. On article 20 of said law, it is stipulated that “contradicts the State ideology, laws and regulations, morality, religion, decency, or public order.” Furthermore, elucidations for this article explains that the term “contradicts to public order” means noncompliance with the existing rules in the public generally such as offending the public or group of people, courtesy or common ethics of the public, and public or group of people tranquility.

We can conclude that the slogan “Go F*ck Yourself, Russian Warship” would be difficult to be registered in Indonesia. This is because said slogan contains a word that, under substantive examination for registry, could be interpreted as offensive to the public. Additionally, the slogan could also be interpreted as offensive towards a group of people, namely Russians, thus making the slogan almost impossible to be registered in Indonesia without significant adaptations or changes.

As of now, the registry for “Go F*ck Yourself, Russian Warship” in EU is still being processed. Meanwhile, if one were to attempt to register that mark in Indonesia, it would most likely be fruitless (and nonsensical) As usual, if partners need to register a mark, contact us at marketing@ambadar.co.id