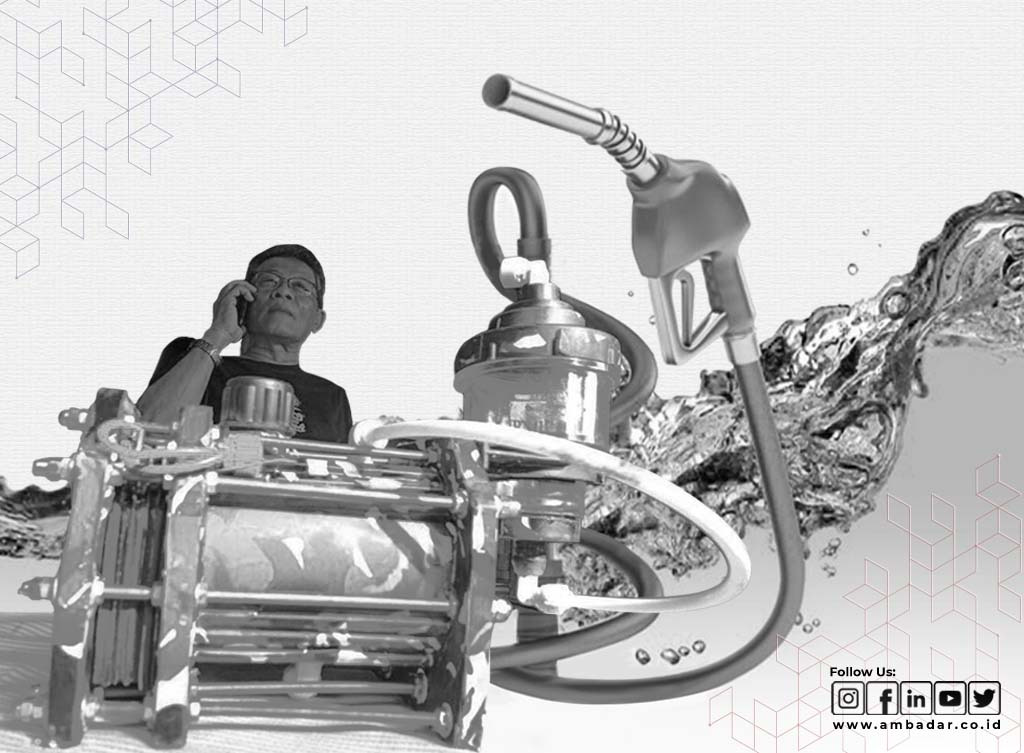 The growing scarcity of natural resources is a unique problem that haunts modern society. Naturally, efforts to conserve or find alternatives to natural resources have been ever present. Meanwhile, in Indonesia, arrives a device that could be the answer to the  soaring prices of fuel oil. 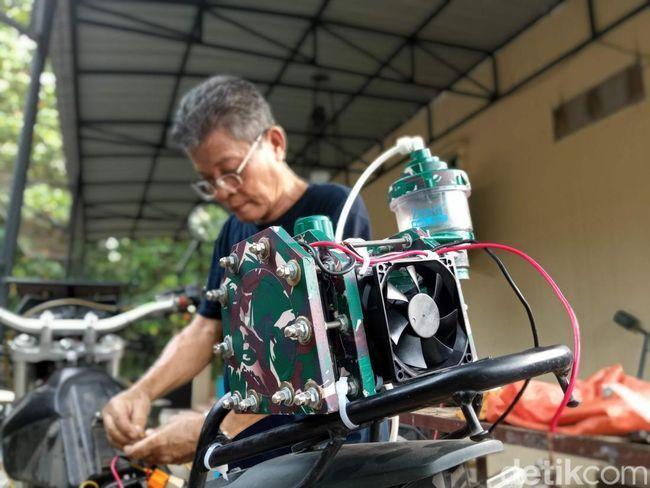 Nikuba is a device that converts water to fuel for motor vehicles. It was invented by Cirebon citizen Aryanto Misel, who claimed that his invention allowed him to go on a round trip of Cirebon-Semarang (roughly 254 kilometers of journey) with his motorcycle, while only using less than one liter of water as fuel.

Aryanto explained that Nikuba functions based on a technique called electrolysis, or the process by which ionic substances are decomposed (broken down) into simpler substances when an electric current is passed through them. To put it simply, Nikuba functions by "separating" hydrogen (H2) and oxygen (O2) in water (H2O), then, the hydrogen obtained from the conversion of would be used as fuel for vehicles. Oxygen would also be electrolyzed into hydrogen and directed into the engine's combustion chamber.

Furthermore, Aryanto stressed that the water used would be water that is uncontaminated by heavy metals. He also explained that the conversion process requires a catalyst, or a substance that increases the rate of a chemical reaction. This catalyst is self-made by Aryanto himself and is organic.

Nikuba as a project began in 2017. According to Aryanto, initially it could only save around 30% up to 40% of fuel consumption. With funding and further developments, it could now convert 100% of water into hydrogen that substitutes traditional fuel.

Narliswandi Piliang, CEO of Nikuba Hidrogen Nusantara, laid out ambitious plans for Nikuba in an interview with katadata.co.id. As of the time of interview, Nikuba had only been applied to 10 units of 200 CC Trail Aviar owned by the The Indonesian Military Regional Commands in Siliwangi. Moving forward, Narliswandi plans for mass production of Nikuba, citing a target of 10,000 units by November 2022. Sales will begin on the island of Bali, where there are also plans to present Nikuba in the 2022 G20 Bali summit conference in November.

In regards to the IP aspects of Nikuba, Narliwsandi said that they are in the process of patent registry. “This process will take at least a year. Inventions could get copied, but we are confident about the market”, he explained.

The arrival of Nikuba had brought some level of excitement to the people, a natural response to the increasing prices of traditional fuel, however, several experts opinions’ could distinguish  the hype.

Associate researcher at The National Research and Innovation Agency (BRIN), Deni Shidqi Khaerudini, gave critiques to Nikuba. He emphasized that energy required to carry out the hydrogen separation process would be greater than the energy produced by it.

"Electrolytic hydrogen requires a highly energy-consuming process and cannot be an alternative to gasoline for motorcycles. H2 is not compatible with combustion engines, thus other conversion methods should be used, namely fuel cells and electric motors," said Deni.

In addition, a professor of the National Research and Innovation Agency (BRIN), Eniya Listiani Dewi also had less supportive opinions on Nikuba, mainly on the claim that Nikuba could fully “replace” fuel. She argued that the Nikuba conversion process involves HHO or brown-gas which is used for combustion, not purely as fuel, and that the electrolysis process by Nikuba does not produce pure hydrogen, but rather a chemical reaction from stainless steel. In short, Eniya doubted Aryanto's claim that the motorcycles used to test Nikuba did not use fuel oil at all.

Moreover, she also believed that Nikuba is not unique, because its core functionality is based on a known theory that has produced similar tools. Indeed in Indonesia, there was a similar device that could also “replace” fuel oil with water. That device was called “Blue Energy”, invented by Djoko Suprapto and was first brought to public in 2008. However, the developments for the device stalled and the inventor  was sentenced to prison over the Jodhipati power plant case.

The uncertainty about Nikuba's future, and the various criticisms it has received, does not mean that the idea of clean hydrogen as alternative energy is dismissible. On the contrary, various reports suggest that, for inventors, clean hydrogen is a popular candidate to replace traditional fuels.

A report by the International Energy Agency (IEA) revealed that global demand for hydrogen has tripled since 1975: 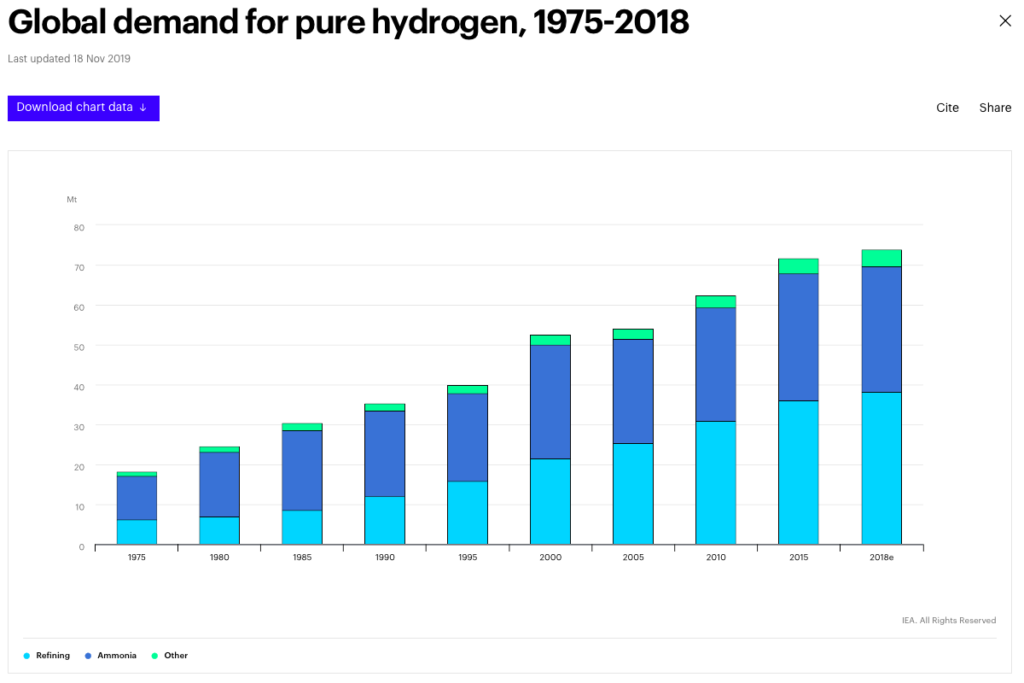 The report touched upon clean hydrogen’s potential as an alternative to traditional fossil fuels. Now, most hydrogen produced still uses natural gas and coal, while clean hydrogen obtained from water conversion (electrolytic hydrogen), such as that offered by Nikuba, only accounts for 0.1% of the hydrogen used by the world's industries. The IEA attributed this low figure to the high costs needed in production. However, the report also anticipated that with the continued decline of the costs of renewable electricity (estimated to reach a 30% decline by 2030), the cost of producing electrolytic hydrogen will follow suit. This prediction along with the consistent rise of global demand for hydrogen, led the IEA to conclude that the demand for electrolytic hydrogen and the technologies that support it (such as Nikuba) will eventually increase.

Viewed through the lens of intellectual property, it seems that statistics on patent registration reflects this increasing demand. Or at least it proves that, for inventors, electrolytic hydrogen is a worthwhile prospect.

Reports by the International Renewable Energy Agency (IRENA) and the European Patent Office (EPO) illustrates how electrolytic hydrogen is seen as a dynamic and relevant concept in the world of technology. The report revealed that patent applications for clean hydrogen-based technologies have experienced consistent growth since 2005, with an average growth rate of 18%.

The report also highlighted some important facts that could signal hope for the future of electrolytic hydrogen. Namely, how the number of patent registrations related to water-based electrolysis technology can match the number of patents based on the hydrogen production from fossil sources. Most impressively, in 2016, the number of patents for electrolytic hydrogen technology exceeded patents for fossil fuel-based hydrogen production technology. In 2018, registrations for inexpensive mineral-based electrocatalysts, such as those used by Nikuba, surpassed the number of inventions related to the more expensive traditional electrocatalysts (such as gold, silver, platinum, or other precious metals), highlighting the growing enthusiasm of the tech world to seek cheaper alternatives. .

Moreover, a report from WIPO also supports clean hydrogen as alternative energy. The report revealed that from 2016 to 2020, patent registrations related to clean technology experienced a significant increase of 23.4%. WIPO suggested that these figures, along with rising demand for various environmentally friendly technologies, such as electric cars, signal that consumers are slowly warming up to alternative sources of energy.

Nikuba has elicited mixed responses from the public. Some are hopeful for the prospect of cheap fuel, some are skeptical of grand promises. Regardless of what the future holds for Nikuba, we must acknowledge efforts regarding alternative energy, or more specifically, how the idea of electrolytic hydrogen could excite the world's inventors to such an extent. So much so, that it is not outside the realm of possibility that clean hydrogen-based technology will be more attractive in the future, and all the weaknesses that Nikuba has, could be covered by future innovations.

Moreover, the studies mentioned in this article illustrate the increasing global awareness for the need for alternative or clean sources of energy. No one could guarantee where the answer to these problems would arrive from. May it be from China, California, Cirebon, or even from the minds of Partners.

If Partners have inventions that you wish to patent, please do not hesitate to directly consult us in order to maximize its potential. In addition, for Partners that require more information as well as other services related to intellectual property, we are gladly waiting for your email via marketing@ambadar.co.id.