The Discovery of Penicillin: The Accidental Miracle 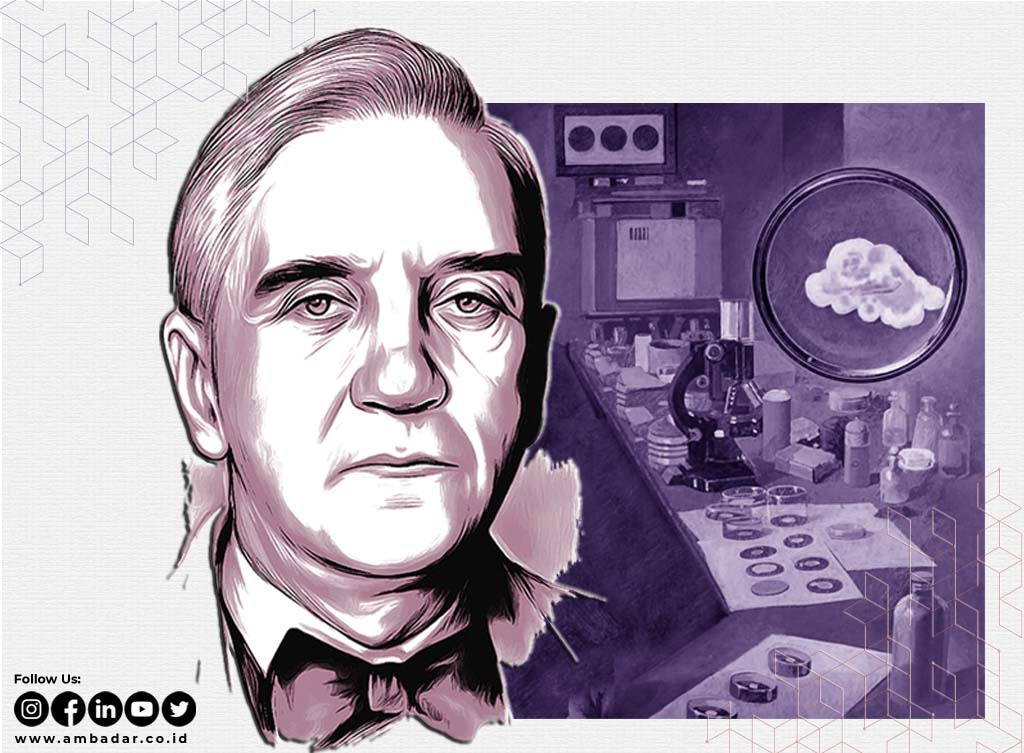 The Discovery of Penicillin: An Accidental Miracle

The global situation of the past two years has increased the public’s consciousness on health. Terms such as vaccines, antibiotics, pandemic and virology are no longer exclusive to the medical community, but have become common usage in media, mainstream or otherwise. In regards to medicine, this date, 74 years ago, marks the anniversary of a patent involving a monumental finding in the history of therapeutic medicine: Penicillin.

Penicillin is a member of the β-lactam antibiotic, commonly used to treat bacterial infections. It can inhibit the growth of bacterial cell walls, thus preventing development of bacterial infections in the body. The arrival of penicillin started a new chapter in medicinal science. Its broad function allows it to treat previously untreatable diseases such as meningitis, pneumonia, gonorrhea, syphilis, and so on. In short, the discovery of penicillin introduced the pharmaceutical industry to modern antibiotics.

The layman might assume that a drug as consequential as penicillin must’ve required 1001 nights of hard work to discover, however, history says otherwise. In reality, great inventions and discoveries could arrive out of dumb luck, pure coincidence or simply from normal everyday tasks. Such is the background of penicillin, the accidental miracle.

In 1928, Scottish scientist Alexander Fleming had just returned from holiday to his lab. Before leaving, Fleming had left petri dishes that contained colonies of Staphylococcus aureus bacteria (bacteria that are known to cause a variety of infections from skin infections to pneumonia). Upon returning, he stumbled upon a surprising discovery, namely the growth of a bluish-green fungi colony on the petri dishes. He also discovered an area near the Staphylococcus aureus culture that remained uncontaminated from said bacteria (inhibition zone), which indicated the growth of the bacteria had been inhibited by an antibacterial agent.

After Fleming and his two assistants, Stuart Craddock and Frederick Riley, conducted the process of extraction and identification, they concluded that the fungus belonged to the genus Penicillium, and that Penicillium could inhibit bacterial growth. Fleming would then publish his findings in the British Journal of Experimental Pathology in 1929.

Fleming fully acknowledged that his grand discovery was accidental

Fleming indeed managed the first major breakthrough in the development of modern penicillin. However, after the extraction and isolation of pure penicillin from the fungus Penicillium, he discovered that the substance was highly unstable. He also found it difficult to purify and process penicillin into a more applicable form for therapeutic benefits. Fleming's discovery couldn’t be translated into practical medicine until researchers from the University of Oxford stepped in: Howard Florey and Ernst Chain, and their colleagues.

In 1941, a policeman named Albert Alexander became the first person to receive penicillin. Alexander had contracted a facial infection so severe that one of his eyes had to be removed. Upon 24 hours of penicillin treatment, Alexander showed significant signs of recovery. Sadly though, there wasn't enough supply of penicillin to continue treatment, and Alexander eventually died from his condition.

Over time, the effectiveness of penicillin would continue to improve. This progress, along with the escalation of war, increased the demand for the drug drastically.

The Oxford team realized that the UK could not support the mass production of penicillin, so they turned to the US. Florey persuaded the US government to take over the task of mass production, which yielded immediate, conclusive impact. In 1941, America’s stock of penicillin was only enough to treat less than 100 patients. Two years later, supplies were sufficient to care for the entire Allied forces. According to an article from PBS, penicillin managed to significantly reduce the rate of infection related deaths. In World War I, as many as 18% of US troops died from bacterial pneumonia, this figure shrunk to just 1% by World War II.

The US government’s mass production of penicillin is a watershed moment. Penicillin production in the United States jumped from 21 billion units in 1943, to more than 6.8 trillion units by 1945. At around the same time, penicillin became accessible to the general American public, as well to other nations, effectively making the life-saving drug available to all. 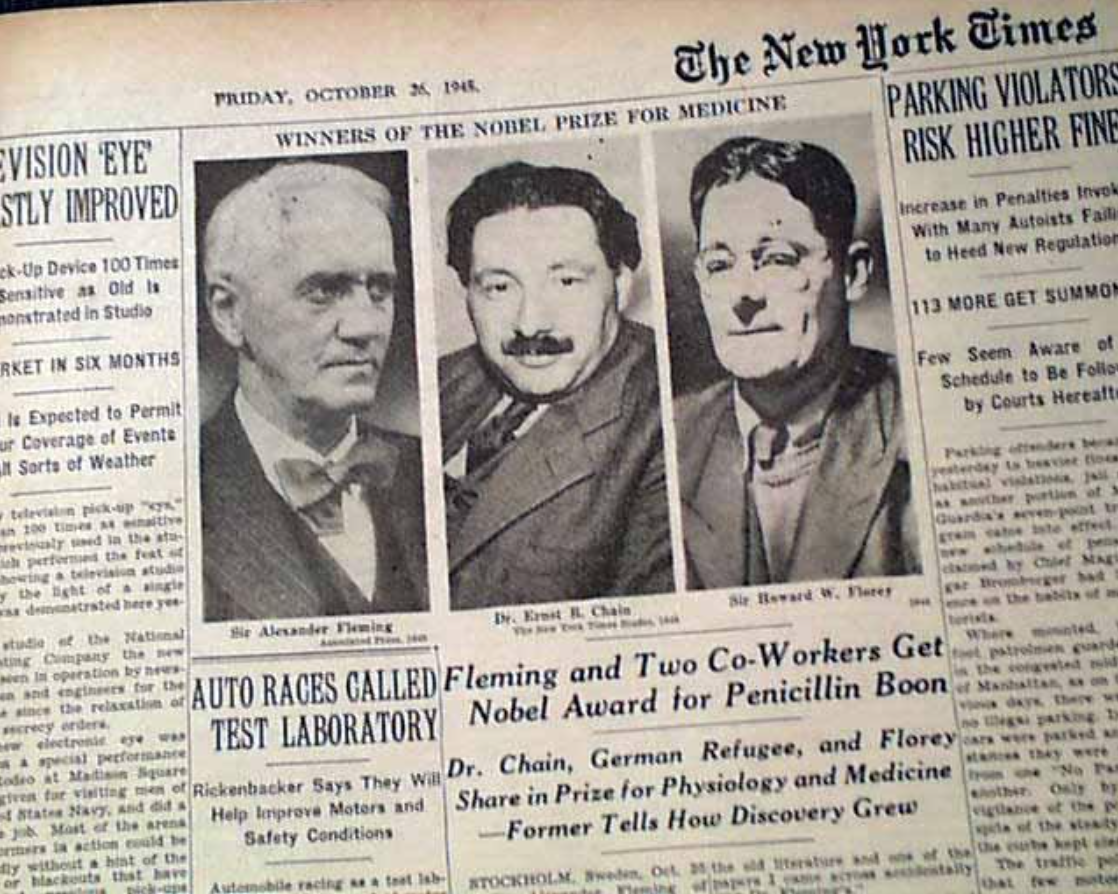 In 1945, Fleming, Chain, and Florey were awarded the Nobel Prize in field of Medicine and Physiology for their contribution to the development of Penicillin. Now their names are forever engraved in history as pioneers of modern antibiotics.

The nature of penicillin raises questions about its status as a patent object. Is penicillin an invented device or a natural phenomenon? This is why none of Fleming, Chain, or Florey attempted a patent registry for penicillin.

Fleming repeatedly emphasized that he was not an "inventor" of penicillin, because penicillin was a natural phenomenon that he discovered by accident, not an invention. Chain and Florey shared the same opinion. Moreover, they also believed that limiting access to lifesaving drugs would be deeply unethical.

Natural acts, in general, are not patentable. Patents basically entail the exclusive rights of an inventor to their invention. The key word here is invention-- in other words there must be an invention (creation) and inventive steps. A natural phenomenon, inherently, has always existed so they cannot be categorized as creations. However, this doesn’t mean that there can’t be any patents at all involving natural acts, because there can be new methods or ways to utilize a natural phenomenon.

Andrew Jackson Moyer is a key figure in efforts of mass producing penicillin. He and his team (researchers from USDA Northern Regional Research Laboratory) discovered that they could significantly increase penicillin production by substituting lactose for the sucrose used by the Oxford team in their culture medium. They also found that the addition of corn-steep liquor to the fermentation medium could significantly increase production. Corn-steep liquor was a by-product of the corn wet milling process, and the NRRL tested it in all of its fermentation work. Later, the Peoria laboratory further increased the yield of penicillin by adding penicillin precursors, such as phenylacetic acid, to the fermentation medium.

On May 25th, 1948 Moyer was granted a patent for the method of mass producing penicillin.

The history of penicillin is often cited as a popular example of "incidental discoveries". Fleming, in his own words, did not intend to change modern medicine, but due to his attentiveness (and luck) he managed to do so. His story serves as a lesson that sometimes, a keen eye and a constantly aware mind are all that is needed to bring about significant change.

Furthermore, it is undeniable that Chain and Florey, who were crucial to the development of penicillin, had noble reasons for not patenting penicillin, however this garnered them criticism from various parties, most notably from England’s scientific community. Chain and Florey were correct in that the chemical on which penicillin is based couldn't be patented, but the methods and processes for developing and producing it into a drug could. Due to Chain and Florey reservations regarding patents, for 25 years, scientists and medical personnel in England were forced to pay royalties for a drug discovered and developed in their own country.

For inventors out there who wish to make the wisest decisions in regards to their inventions, consult to us directly via marketing@ambadar.co.id