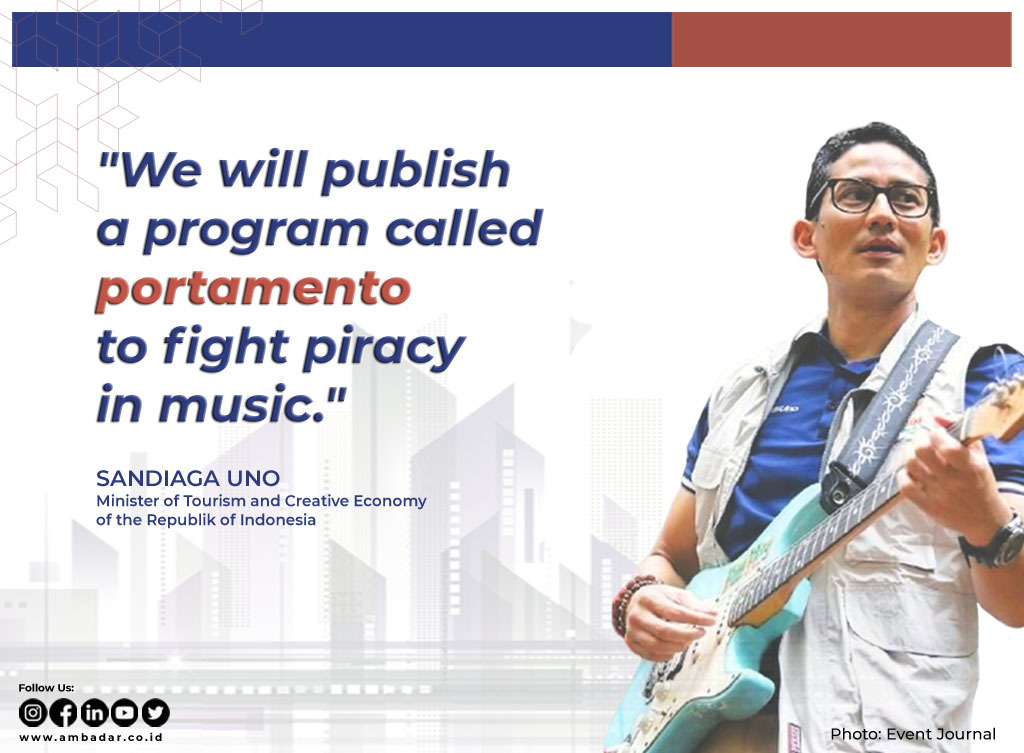 Digitalization has impacted modern society in such a profound way that every walk of life has been forced to adapt. The entertainment sector, specifically music, is no exception. Since the dawn of digitized music 20 years ago, backed by file-sharing platforms such as Napster and Limewire, the music business has found adapting to this new era rather difficult. Of course, the biggest victims are the musicians themselves– as technology has made it very easy for their works to be shared and played without compensation.

In response to this, the Ministry of Tourism and Creative Economy offers a solution.

Last September, on a talk show discussing digital music, Minister Sandiaga announced the Government’s plans to publish a program called “Portamento”. According to his descriptions, Portamento is a platform that calculates royalty shares for music, with the aim to help the royalty management system, reinforce copyright protection for music, and tackle music piracy. To support this, Sandiago also stated that the Government will give incentives that encourage artists to register their works, in the form of free-of-charge registration services and assistance.

Portamento is among the Government’s recent efforts to strengthen copyright protection in Indonesia. Royalties for musicians have been regulated in Indonesian law, but the enforcement has been inconsistent, and the general public are generally ignorant or oblivious of it, which has caused musicians potential fortune.

The following are the regulations regarding music royalties according to Indonesian law. Partners, must know this, especially for owners of establishments where music is often played:

In Indonesia, royalty payments in music are regulated by Government Regulation  Number 56 of 2021 concerning Management of Royalties for Song and/or Music Copyrights. The essence of this regulation lies in Article 3, which stipulates that the commercial use of songs and/or music in the form of commercial public services can be done by paying Royalties to the Author, Copyright Holder, and/or Related Rights owner through LMKN.

What is defined as “commercial forms of public service” is the utilization of Works and/or Related Rights products to receive financial benefits from various sources or for a fee. According to Article 2 of Government Regulation No. 56/2011, that such action includes: performances, announcements, and/or communication of a musical creation. It is further explained in Article 3 Paragraph (2) that forms of commercial public services may include:

It’s important to note that the rate of royalties differs according to the type of service. For example, the Decree of LMKN No. 20160512RKBD/LMKN-Pleno/Tarif Royalti/2016, stipulates that royalty rates for restaurants are Rp60.000 per chair per year. Meanwhile, for seminars, the rate is Rp500.000 per day, as stipulated in Decree of LMKN No.20160512SKK/LMKN-Pleno/Tarif Royalti/2016

Lastly, “LMKN”, stands for Lembaga Manajemen Kolektif Nasional or National Collective Management Organization, the non-State sponsored institution established and authorized by the Government to withdraw, collect, and distribute Royalties as well as manage the interests of the economic rights of Authors and Rights Owners in the field of music.

Public awareness for music copyright in Indonesia may still be relatively low, and the Portamento platform has yet to launch, but these are the correct steps toward copyright reformation in Indonesia. The public ought to support efforts to fix the ecosystem of intellectual property. Not simply because of the potential economic rewards, but also as a form of appreciation to the artist who has bled for the work that coloured our lives.

If Partners need any services regarding IP, please contact us via marketing@ambadar.co.id. We will give the best service according to your needs. For the musicians concerned about royalties, for the restaurant owners curious about copyright ethics, and beyond, we are available.