Spectrum of Distinctiveness in Trademark 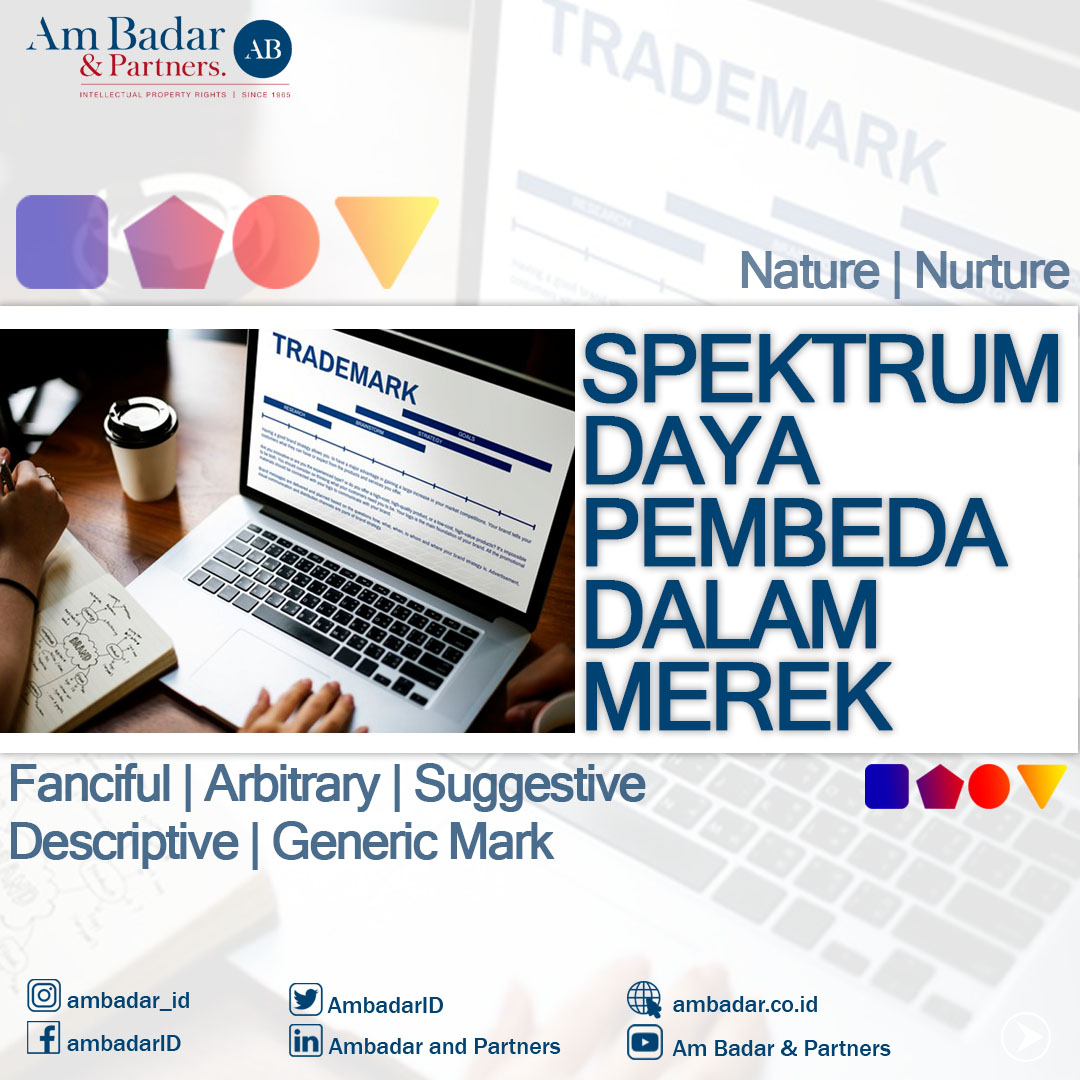 Pursuant to Article 1 Paragraph 1 Indonesian Trademark Law No. 20 of 2016 on Trademark and Geographical Indication (Trademark Law) “Marks shall mean a sign shown graphically in the form of picture, logo, name, wording, letter, number, compositions of colors, in 2 (two) dimensional form and/or 3 (three) dimensional form, voice, hologram, or combination from 2 (two) or more of such elements in order to distinguish products and/or services produced by an individual or legal entity in the trading of goods and/or services activities”.

Based on the above provision, it can be clearly seen that a trademark is a sign which has a function to distinguish product produced or sold by one producer from another. Trademark is a unique identity or identifier of a product, thus one of the requirements for a trademark to be registered is the mark must have distinctiveness. As regulated in Article 20 of the Trademark Law which states that a mark cannot be registered if it does not have distinctiveness. Distinctive of trademark is the ability of trademark to identify the source of goods in order to distinguish between goods and services

In the United States, in the case of Abercrombie & Fitch Co. v. Hunting World, Inc. emerged the concept of distinction. Judge Friendly, in his influential decision in the 1976 Second Circuit Court of Appeals, found the "Abercrombie classification", also known as the "spectrum of distinctiveness". Abercrombie classification or spectrum of distinctiveness is a standard or mark distinction scheme used by Judge Friendly in making decisions in these cases. This brand differentiation scheme is divided into 5 (five) categories, from brands that receive the highest protection to brands that are not eligible for protection, namely :

Fanciful is a mark which formed from a unique and interesting imaginary word that does not clearly describe their goods or services.A Fanciful mark uses words that are self-created or are not in any dictionary and are not well known by the general public, and used for the purposes of being a brand. For an example: GOOGLE, NOKIA, KODAK

An Arbitrary mark has a common meaning that has no relation to the product or service on which it is used. It is a known word used in an unexpected or uncommon way. For an example: apple which known as a name of fruit but is used for trademark for computers and smart phones.

A Suggestive mark suggests a quality or characteristic of the product or service, but requires imagination, though or perception to connect the mark with the product and service. Marks in this category are inherently distinctive, but it is often difficult to predict whether certain wording will be considered suggestive or descriptive. Suggestive marks have a broader scope of protection than descriptive marks. Example :KIJANG (for car product), KIJANG in Bahasa Indonesia known as an animal which is agile in running, means the suggestive that the car can drive swiftly in the middle of heavy traffic.

The Generic mark is the mark that describes the genus of products it represents. This type of mark is more to describe the object in general. For example, the word “Refresher Solution” for a freshener solution product, or the word “Bag” for a bag product.

Based on the aid spectrum of distinctiveness there are marks that inherently distinctive, namely the Fanciful, Arbitrary and Suggestive mark. The three marks of this type have sufficiently strong distinction and have a higher possibility of being registered as long as they do not conflict with the provisions of the Trademark Law.

In addition, there is a mark which Capable of becoming distinctive, namely a descriptive mark. Basically, a descriptive mark cannot be protected because the element of distinguishing power is very small, unless the brand already has an additional meaning or Secondary Meaning. Secondary Meaning does not occur automatically but occurs because of the efforts of the brand owner so that the general public can already recognize the origin or owner of the brand (single source of goods). A descriptive mark in nature that can build a secondary meaning well, has a strong distinctiveness as well for being eligible to be registered as a trademark, for example the trademark Aqua and Supermie . Meanwhile, the Generic Mark is incapable of becoming distinctive and the generic mark cannot be registered.