Spotify and The Issue of Royalties 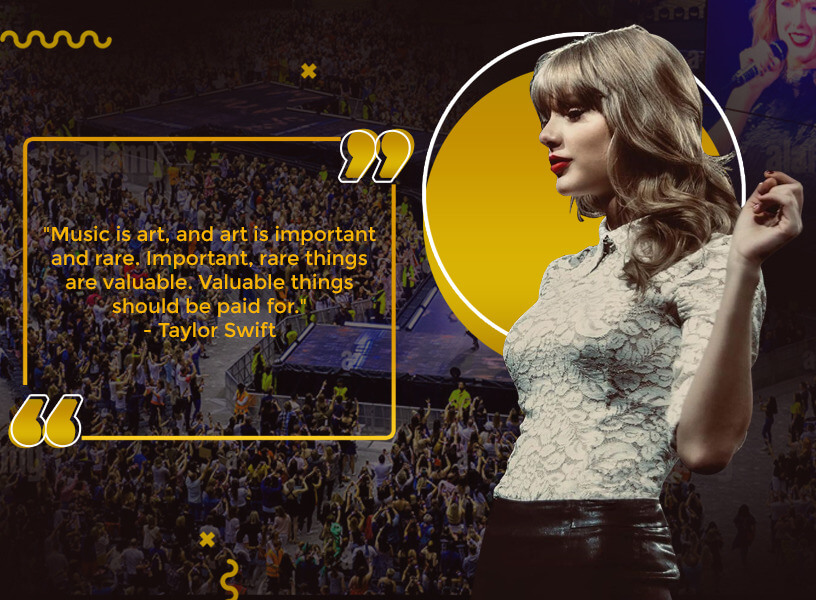 Some time ago, Taylor Swift wrote an article for The Wall Street Journal on online music streaming. On it she states, “Music is art, and art is important and rare. Important, rare things are valuable. Valuable things should be paid for. It's my opinion that music should not be free, and my prediction is that individual artists and their labels will someday decide what an album's price point is. I hope they don't underestimate themselves or undervalue their art."

Shortly after releasing said article, Swift pulled her entire discography off from Spotify. Similar actions were taken was by Thom Yorke, vocalist of the legendary band alternative act Radiohead. After also pulling his work from Spotify, he tweeted, “"Make no mistake—new artists you discover on #Spotify will not get paid. Meanwhile, shareholders will shortly be rolling in it. Simples."

Yorke producer Nigel Goldrich also echoed his statement by adding “"[Streaming] cannot work as a way of supporting new artists' work. Spotify and the like either have to address that fact and change the model for new releases, or else all new music producers should be bold and vote with their feet."

Although Yorke and Taylor Swift have now re-uploaded their music to Spotify, their previous actions reflect a problem with Spotify, and the general antipathy that musicians feel towards the streaming platform. What’s behind it?

Spotify was founded in 2008, at a worrying time for the music business. The music industry had not yet adapted to streaming technology and was devastated by online piracy. According to a study by Forrester Research, in 1999 the music industry earned $14.6 billion in revenue. In 2008, the number dropped dramatically to 6.3 billion. Spotify may deserve some credit for attempting to address this issue by providing a platform that adapts to the streaming culture with an accessible, and more importantly, legal means. However, many music industry workers, especially independent musicians, feel that they are treated unfairly by Spotify

In contrast to physical sales or paid downloads which pay musicians according to a set price, Spotify's royalty payment system is based on “market share”, or according to the number of times a song is played compared to the total streams on Spotify. An estimated 70% of Spotify's revenue goes to the copyright holders of song, which are then shared with musicians under specific agreements between parties. Spotify claims that they pay between $0.006 to $0.0084 per play, but some claim that they are paid even less than that.

Spotify's system has often been criticized for being difficult towards small, non-major labels. The Guardian states “On Spotify, it seems, artists are not equal. There are indie labels that, as opposed to the majors and Merlin members, receive no advance, receive no minimum per stream, and only get a 50% share of ad revenue on a pro-rata basis (which so far has amounted to next to nothing)."

Spotify's payment system have also received criticism for underpaying, even compared to the already relative low standard for streaming services. Trichordist conducted a study in which they analyze total streams from a particular service in relation to total revenue. The study revealed that Spotify contributes 62.97% of music streams while generating only 69.57% of revenue for the music industry. At first glance this may not look bad, but compared to other services, it reveals that their system do not give optimal contributions to the overall revenue.

The same study reveals that Google Play Music service amounts to  2.36% of the total streams, but has given 4.03% of revenue for the music industry. Tidal only covers 0.1%,  of streams but is able to provide 0.33% of revenue. Meanwhiel, Rhapsody (now called Napster) only takes up 0.52% of the market, but generates 2.52% of revenue. Spotify  though, is the not worst according to the study. YouTube amounts to  21.7% of the music streaming market, but only 3.81% of music industry revenue.

Does this mean that the use of Spotify is unethical? Should Partners feel guilty about using Spotify or similar services? Not really. Spotify founder Jim Anderson responded to criticism of his streaming service with the statement: “Spotify was created to solve problems. The problems are: music piracy and distribution.  The problem is how musicians can distribute their work. The problem is not about paying musicians."

From that point of view, Spotify isn’t the blood sucking Dracula its sometimes satirized as. Given that Spotify was originally founded in response to the rise of illegal downloads in the 2000s, and at least they popularized a system that could harmonize technological developments, people's online culture, and the music industry. In addition, Spotify has also made it easier for amateur musicians to distribute their work and build their brand. Prior to this era, musicians depended on record labels for a living. Labels effectively own the rights to their songs and take most of the revenue from record sales, live performances, and publishing. Whereas platforms like Spotify can give musicians a greater chance of finding success without a label.

Then what if Music loving Partners still feel uncomfortable with the facts and want to help musicians, especially local acts? Musicians, like workers from all sectors, have been hit hard by the pandemic world. The best way to support them is to purchase their album, either physical or digital (if any). Also by buying their merchandise, express support via social media, donating through their Patreon account, and so on. Of course, when this pandemic is over, also go to live events. That way, they will get far more benefits than what they get from Spotify and similar services. More importantly, they will feel their work is appreciated, which is what any musician truly wants.