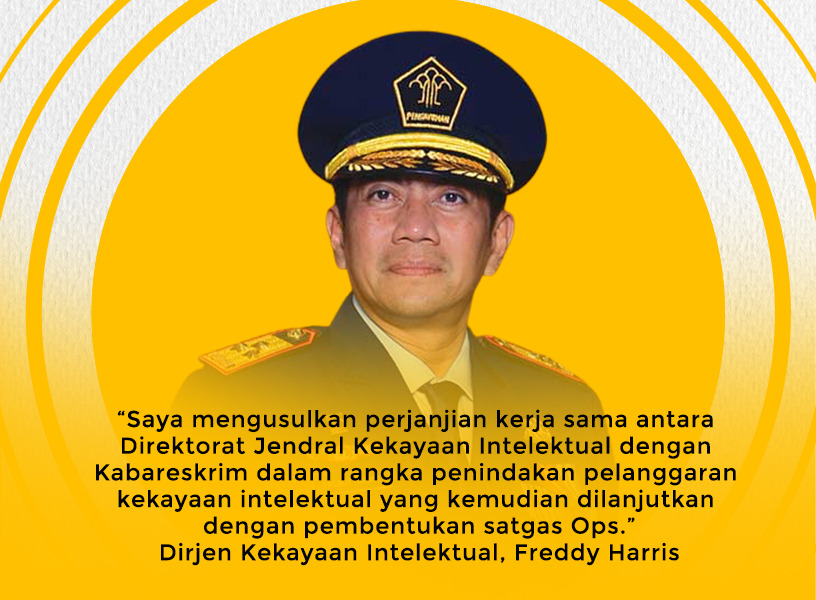 The advancement of technology has made it easier for the human race to acquire information. In a matter of seconds, almost everything we wish to know could be delivered to our fingertips. In this era, it is not difficult to independently enrich our intellectual capability, as well as to quickly interact within a massive scope. It is undeniable that the internet has brought tremendous benefits to modern life, but as with all the positive things, there is a dark side.

Accessible technology has led to rampant Intellectual Property infringement. Violations such as the downloading of pirated software, illegally uploading concert footage to social media, using counterfeit clothing products and so on are still widely carried out by the Indonesian people. Even official news corporations have blatantly spread illegal streaming sites to watch films. This is a portrait of how low the collective Indonesian public’s awareness is in regards to intellectual property rights protection. One question arises: does our government allow it?

Every year, the US Trade Representative or USTR evaluates countries in terms of their effectiveness towards Intellectual Property protection. Priority Watch List, or PWL status is given to countries that are considered weak or inadequate in providing protection for intellectual property rights. One of the countries that have been given this status is Indonesia, and it has been so for 15 years. This not only has the potential to discourage Indonesia’s possible foreign investors, but may also defame the nation in general.

In order to achieve Indonesia’s exit from the PWL, the Directorate General of Intellectual Property (DJKI) of the Ministry of Law and Human Rights together with the Criminal Investigation Unit of the National Police are planning to form a task force. The plan was conveyed by the Director General of KI Freddy Harris during a meeting between DJKI and the Criminal Investigation Unit at the National Police Headquarters last August. Director of Investigation and Dispute Settlement of DJKI, Anom Wibowo explained that there will be five programs to assist the task force, namely: Establishing Regulations of Minister of Law and Human Rights, Cooperation Agreements with Stakeholders, Procurement of Investigating Tools, PPNS Training, and Establishing Functional Positions of Investigators. He emphasized that actions will not only be limited towards infringement of physical objects, but there will also be prosecutions for digital platforms.

The establishment of a Task Force to bring out Indonesia from the PWL is one of several recent government efforts to fight intellectual property rights violations. Similar developments emerged last June, when the Directorate of Investigation and Dispute Resolution of the DJKI and the Directorate of Copyright and Industrial Design of the DJKI, together with the National Collective Management Organization (LMKN) and the Indonesian Ministry of Communication and Information (Kominfo RI) revealed plans to form a Law Enforcement Patrol Team For Copyright Content, in order to prevent or reduce the prevalent copyright infringement of songs, films, and books, especially online. Regarding the complaint offense system regulated by Act No. 28 of 2014 on Copyright, Anom Wibowo commented that “We can search for the perpetrators of rights violations. Upon finding them, we inform the owner of said rights.”

Although we cannot yet know the long-term influence of these IP task forces, the existence of these efforts is a sign of the government’s increasing concern towards IP protection. Crucial first steps have been taken in leading towards the right path. We, as citizens must also show support towards the government’s efforts in protecting Intellectual Property. Because IP protection is important not only to remove Indonesia from PWL and build an attractive image for foreign investors, but awareness of Intellectual Property can be an impetus for the public to respect each other more. Intellectual Property Protection is an acknowledgement that there are great efforts behind a particular product or invention, and those efforts deserve to be respected and protected. Intellectual Property Protection is a form of appreciation towards people with thirst for creativity and innovation.

If Partners require further information regarding Intellectual Property registration, please do not hesitate to contact us via marketing@ambadar.co.id.