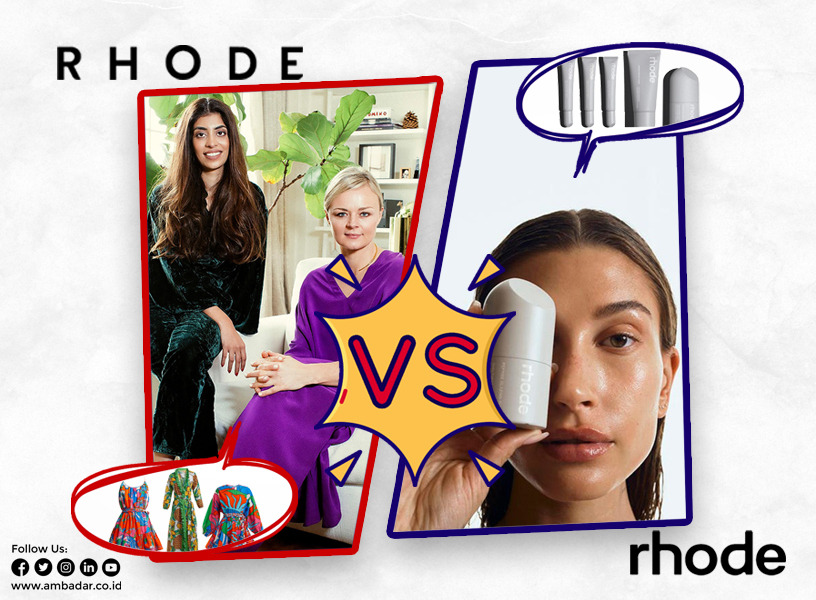 It’s reported that Hailey Bieber got tangled up in a legal battle with RHODE for allegedly infringing the company's Trademark by releasing her skincare line by the name of Rhode.

RHODE is a fashion brand known for its stylish designs, which are often worn by well-known individuals, such as Beyonce, Tracee Ellis Ross, and Hillary Duff, just to name a few. RHODE has been garnering attention as well as success since 2014.

RHODE may be a successful brand, but it still worries about the release of Rhode, Hailey Bieber’s skincare line. Through their legal representation, Vickers and Khatau state, “While a global brand, we are still a young and growing company, and we cannot overcome a celebrity with Hailey’s following using our company’s name to sell related products.”

The statement was followed by an acknowledgment that RHODE had no problem with competition, but they opposed the idea of competitors using their name.

As reported by Women's Wear Daily (22/7/2022), RHODE testified that Bieber desires to enter the world of fashion; this intention can be seen in her application for “Rhode” in Class 25 for clothing in 2018.

Although the two companies do not offer the same product, there are concerns that product differences are not enough to eliminate potential confusion for consumers. Therefore, RHODE acts to protect the interests of the company and its loyal customers.

Hailey Bieber had wanted to buy the RHODE Trademark in 2018. However, the two Trademark owners refused to accept Bieber's offer. After the failed purchase attempt, Hailey Bieber moved on to releasing Rhode skincare and applying for Trademark registration for Rhode.

Please note that the Rhode lawsuit includes a request for a preliminary injunction, which, if granted, may stop Bieber's usage of the word 'Rhode' for her marketing activities.

The request was rejected by a Federal Court judge on July 22 yesterday. As a result, Hailey Bieber will be able to continue the marketing activities of Rhode.

The issue of similar Trademarks is not complicated; in America, the Trademark system is called ‘first to use’. RHODE, which has been around for 9 (nine) years, has the right to use the RHODE Trademark. The rights of RHODE owners are not limited to just using the Trademark but also to protecting it. The legal remedies taken by Vickers and Khatau can be categorized as an effort to protect their Trademark.

However, on the other hand, Hailey Bieber's Rhode does not sell the same product as Vickers and Khatau's RHODE. Are the differences between the products enough to suggest that there will be no confusion? It should be emphasized that US Trademark law focuses on the element of “likelihood of confusion” when handling Trademark infringement cases.

For example, we can take the Interspace Corp. v. Lapp, Inc. case, where there is a similarity of Trademarks owned by companies that sold related but not directly competing products. Several points can be drawn from the case to decide whether there is a Trademark infringement between two Trademarks that are similar but not in the same market:

It is known that the fashion and skincare markets are side by side. It’s not rare for a fashion brand to expand its business into skincare. Therefore, there is concern that RHODE consumers may mistake Hailey Bieber's Rhode for RHODE. It could be mistaken for RHODE's expansion into the field of skincare or a new company related to RHODE. The point is that there may be a chance for confusion to arise. But of course, RHODE not only has to explain the potential for confusion, but also has to prove that confusion is already present due to the release of Bieber's Rhode.

Suppose this case happens in Indonesia; considering that Indonesia is a country that uses the first-to-file system, which means that there is a priority in registration, how would a case such as this unravel here?

Pay attention to Article 83 paragraph (1) of the Law on Trademark and Geographical Indication:

In this case, the owner of the Trademark is Vickers and Khatau because these parties registered their Trademark first. The Rhode and RHODE brands market different or dissimilar products, namely fashion and skincare.

What about the trademark cancellation lawsuit? Article 76 provides a legal ground for a lawsuit for canceling a Trademark for reasons covered in Article 20 and/or Article 21. Since the issue, in this case, is similar or identical Trademarks, we will direct our focus to Article 21, which reads:

“The application is rejected if the Trademark has similarities in principle or in whole with:

Got questions or inquiries regarding this topic? Feel free to contact us via marketing@ambadar.co.id, we'll be sure to assist.