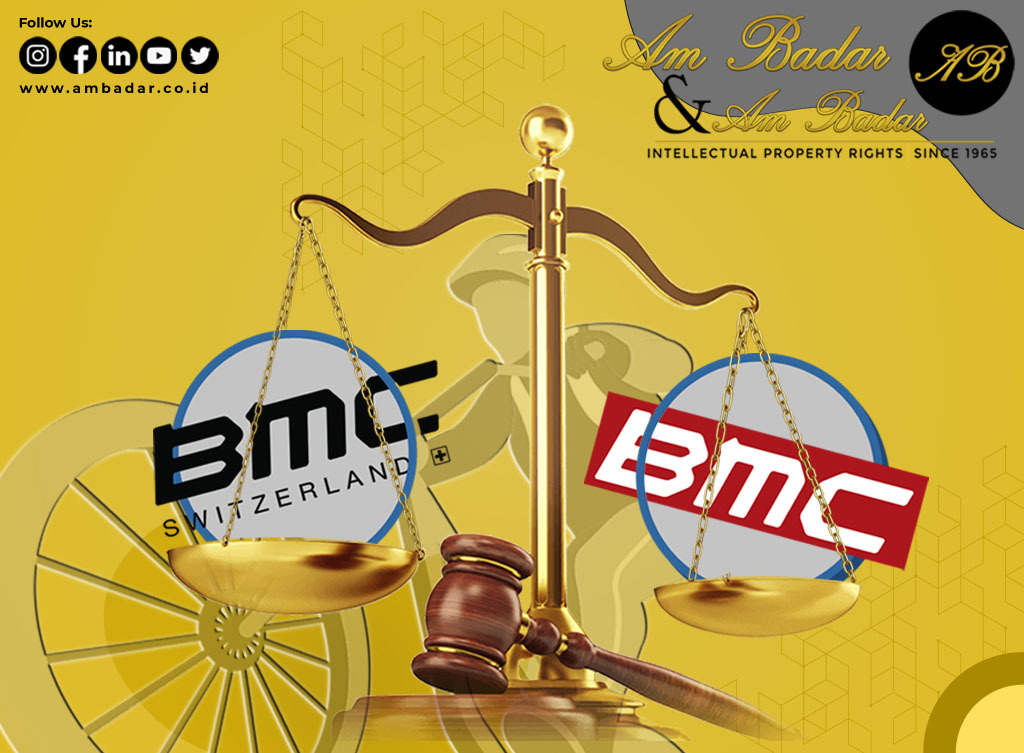 Are you a fan of cycling? If the answer is yes, then you must already be familiar with the brand BMC. BMC is a well-known brand in the world of sports and bicycles. The quality and speed of BMC bikes helped build the Switzerland born brand into what it currently is, in terms of popularity. Everyone who uses the bikes guarantees their high quality. The brand is so trusted that athletes brought the bikes produced by BMC Group Holding AG to world competitions.

The Crux of The Dispute

On 16 November, 2021, BMC Group Holding AG registered their lawsuit numbered 76/Pdt.Sus-HKI/Merek/2021/PN Niaga Jkt.Pst. The lawsuit was directed at Edina Nathania, owner of the local BMC trademark. According to the public information shared by Central Jakarta District Court Case Investigation Information System, we have established that the core reason for the lawsuit is because the local BMC trademark that was registered and used to sell class 12 products, which in this context is bicycles, is identical to the world famous BMC trademark owned by BMC Group Holding AG, which is also used to market bicycles.

Edina Nathania in turn also sued the Swiss based company for a different reason. In her lawsuit, numbered 7/Pdt.Sus-HKI/Merek/2022/PN Niaga Jkt.Pst, she states that she alone is the lawful owner of the BMC trademark in Indonesia. The local BMC trademark has been registered since 5 June, 2012.

BMC Group Holding AG argued that they are the sole owner of the BMC trademark because the trademark has been used and registered by the company in multiple countries all over the world. The Swiss company also stated that the registration of the local BMC trademark by Edina Nathania is a form of bad faith because it copies the already known BMC trademark.

What we can conclude here is that both parties have the right to sue the other party. Swiss based BMC feels they were the one who invented the BMC trademark, built it into the popular brand it is today. They find that a similar brand exists in Indonesia and has been registered and used since 2012, therefore in their perspective, stealing their potential market, because they now can’t use their trademark to sell their products. It isn’t great for the local BMC either, because they did register the trademark first. According to the Indonesian trademark law, the party who registered the trademark first, has exclusive rights to it. So it makes sense for the owner of the local BMC to be protective towards the trademark.

How Does The Trademark Law Apply In This Case?

We need to talk about Edina Nathania’s rights as the owner of the local BMC trademark. According to Article 3 of Law Number 20 of 2016 about Trademark and Geographical Indication, trademark rights are obtained when a trademark is registered. Explained in Article 1 number 5 of the same Law, exclusive rights are given to the owners of registered trademarks for a specific period of time by using the trademarks themselves or giving permission to other parties to use them. Having ownership of a trademark means you have the right to protect the trademark itself, and also your rights surrounding it.

However, Article 21 Paragraph (1) letter b of the Trademark and Geographical Indication Law states: “ The application is rejected if the trademark has similarities in principle or in its entirety to:… a well-known trademark belonging to another party for similar goods/and or services”. The Elucidation of the Article explains that a trademark is considered well-known if it is seen from the general knowledge of the community, the reputation of the trademark, the investment in several countries made by the owner and the trademark has been registered in other countries. It should also be emphasized that for this argument to be used, the well-known trademark in this context has to predate the trademark its suing, for example, in this case BMC Switzerland has existed since 1994, way before the local BMC trademark.

For more details regarding the criteria for well-known trademarks in Indonesia, see the Regulation of The Minister of Law and Human Rights Number 67 of 2016 concerning Trademark Registration. Article 18 Paragraph (3) of said Regulation stipulates that: “ In determining the criteria for a trademark to be considered a well-known trademark as referred to in paragraph (1), it is carried out by considering:

Just as the owner of a registered trademark can file a lawsuit against the use of their mark by another party, the owner of a well-known trademark can also sue on the basis of the use of a trademark that is identical to theirs. Article 77 paragraph (2) of the Law on Trademark and Geographical Indication states that a lawsuit for the cancellation of a trademark can be made indefinitely if there is an element of bad faith.  If BMC Group Holding AG can prove that there is an element of bad faith in the registration of the local BMC trademark, then the application for cancellation of the trademark made by the company can be considered valid.

The local BMC’s task in this case is to push the narrative that their trademark is lawful and was not registered in bad faith to imitate a well-known trademark.