Protection Of The Performing Arts, Opportunities And Challenges Entering The Industry 5.0 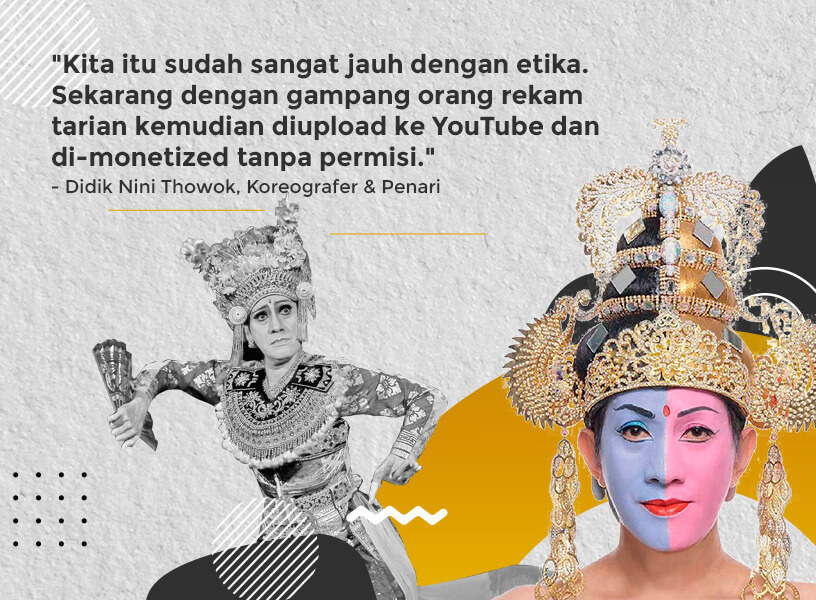 In facing the era of Industry 5.0, performers of the arts, especially performing arts, are required to think creatively in the face of changing times. The aim is to increase understanding of copyright protection, especially performing arts for artists and performers. So as to provide knowledge to artists so that they can record their creative works in the field of performing arts and also related to the modification of traditional cultural expressions. For this reason, DJKI Kemenkumham on 27-28 October held a Socialization on the Development of Performing Art: Protection of the Archipelago Performing Arts, Opportunities and Challenges in Entering Industry 5.0. The event, which took place in Yogyakarta and was broadcast live through DJKI's YouTube channel , provided a lot of interesting information.

Opened with the appearance of the Walang Kekek Mask Dance from Didik Nini Thowok, his presence was not only entertaining but also provided information regarding his dance activities that have followed the Intellectual Property rules. He also reminded performing artists to do the same. "Now is the time for performing artists to appreciate their work and understand the legal procedures," he explained.

The owner of the real name Didik Hadiprayitno also reminded young artists to always maintain good manners and ethics in using the works of other artists. At least by including the credit of the artist's name as a form of appreciation and appreciation. He also gave an example of how a dancer or choreographer still has to respect whoever creates the accompanying music, even though they have not been able to pay royalties.

It is not easy to manage royalties in performing arts, especially dance arts, because ideas are easy to steal. For example, he explained that he had worked on the music and dance of Roro Jonggrang with an opera model in 2010. However, after that, many people tried to modify the work irresponsibly and without permission, they just imitated and took the music and used it. Another example is when there is a dance competition in Japan, and one of the performers wins thanks to the modified dance, what is feared is disinformation about the origin of the dance from Japan, not from Indonesia.

Furthermore, Mr. Daulat Silitonga, as Director of Intellectual Property Cooperation and Empowerment, said that a performance or also called performing art is a work of art that involves individual or group actions at a certain place and time. In performing arts, it does not only involve one type of component, but also involves other works of art. When there is dance, there are other arts that support it, such as music and choreographing. The arts of dance, music, and musicians who play are also protected as performers.

If you need more information regarding Copyright and its regulations, contact us via e-mail marketing@ambadar.co.id